The National Institute for Justice explains that “predictive policing tries to harness the power of information, geospatial technologies and evidence-based intervention models to reduce crime and improve public safety. This two-pronged approach — applying advanced analytics to various data sets, in conjunction with intervention models — can move law enforcement from reacting to crimes into the realm of predicting what and where something is likely to happen and deploying resources accordingly.”

Geolitica’s proactive policing is the sum of two parts:

Geolitica is based on nearly seven years of detailed academic research into the causes of crime pattern formation. That research successfully linked several key aspects of offender behavior to a mathematical structure that is used to predict how crime patterns will evolve from day-today and from moment-to-moment. 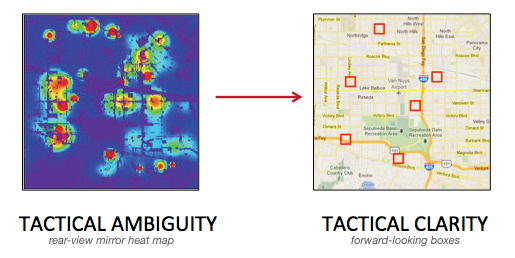 A Guarantee of an Incident or Arrest

While Geolitica’s patrol boxes indicate that an area is at higher risk, there is no guarantee that an incident or arrest will occur. AND THAT’S THE POINT! The presence of police officers in the recommended patrol areas creates a deterrence and suppression effect, thus preventing crime in the first place.

“It’s not how many people you catch, it’s how many crimes you prevent.” - Los Angeles, CA PD Chief Charlie Beck

Geolitica predicts the locations at highest risk for designated crime types. We never predict not who is likely to commit a crime.

Geolitica does not collect, upload, analyze or in any way involve any information about individuals or populations and their characteristics. Geolitica’s software technology does not pose any personal privacy or profiling concerns. The algorithm uses only three pieces of data – type, place, and time – of past crimes.

Geolitica is set up to integrate with our client agency’s own technology within hours and requires no new hiring or hardware. Geolitica’s actionable predictions are produced for each shift in one tap or click, and can be printed or accessed securely through computers or mobile devices in patrol cars and in the field. Deployable within a matter of days, Geolitica can be purchased for competitive rates that are straightforward with no user limits or hidden costs.

“If I wasn’t confident that this will help the city I would not invest in it. It will help us use our limited resources more efficiently.” - Haverhill, MA Police Chief Alan DeNaro